Hailing from a small town a few hours from Helsinki, Man Duo is bringing some alluring tunes to the airwaves.

Perhaps it’s the fact that they come across as a rather somber and tranquil duo, that you can’t help but compare these two to a modern Simon and Garfunkel. That is, if Simon and Garfunkel had produced some magical electro beats with Scandinavian flair.  They probably won’t be thrilled by this comparison, preferring to be categorised as completely innovative, but all music takes influence from the past, whether consciously or not; the mind is a funny place. 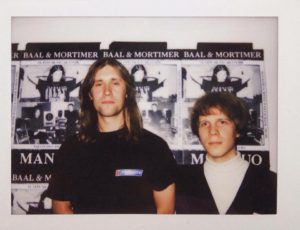 The group consists of Jaakko Eino Kalevi and Sami Toroi (Long-Sam), who have been working in an on-again-off-again musical relationship since they were children. As it were, Man Duo is their most recent project. Though sounding like a bad relationship that should have ended years ago, the energy between these two is quite lovely to see in person. They have a deep understanding for each other that goes beyond words- almost like a platonic romance. They are both incredibly grounded and consider their music to be very much a career, which should be taken seriously. As such, their days tend to be quite regimented; Sam says that they get up in the morning, have a coffee and get right to work. A very practical and pragmatic approach to an industry often thought of being filled with glitz and glamour.

Crafted in their Berlin studio, Man Duo released their most recent album “Orbit” last year, which features a guest appearance by Sean Nicholas Savage. Each song is a pleasant surprise; it’s not that consistently is lacking, but more that the group tends to mix up musical styles throughout the album. I find this actually quite refreshing in the sea of assimilation we tend to see in the modern music industry.  Regarding future plans to release a new album, keep your eyes peeled for a remix coming in the not-so-distant future.

During our interview we talk about the importance of image in the music industry, their start with heavy metal as kids, and the supreme comfort of a turtleneck. Check it out below:

Interested in finding out more? Check out their bandcamp page: https://manduomusic.bandcamp.com/releases

Pow Magazine is an independent publication supported
by our readers. To contribute to Pow, visit patreon.com/powmagazine.