You may have heard of the Warbly Jets from their brilliant debut single Alive, which was released in 2016. Though currently based in Los Angeles, the group has strong New York roots. So much so, that their group name references the New York classic, Westside Story. Starting with duo Samuel Shea and Julien O’Neill, bassist Dan Gerbang and drummer Justin Goings later joined the group. Though relatively new on the scene, they have already attracted a lot of attention for themselves, and are currently supporting Liam Gallagher on his US tour.

To the pleasure of their fans, they released their debut album in October of this year. Their sound is raw, passionate and merges that suave LA vibe with a grimy New York feel. It’s soulful and at times reminiscent of groups like the Black Crows and Primal Scream, while also incorporating 90s grunge elements (think the Hives meets the Dandy Warhols). This isn’t to say that their sound is borrowed from anyone else, but rather that they have a myriad of different influences…like any other group I guess you could say… Armed with a strong identity and a mission, they have set forth a plan to manifest their musical vision.

These guys have a true passion for what they do; they are not a manufactured “rock band” posing with instruments to create some kind of contrived image, which if we are blatantly honest, happens a lot of the time with other groups… Rather than producing a sound in line with a record company’s agenda, they create music which stays authentic to who they are as a group. Quite an honourable feat in today’s music industry, if you ask me. They have faced their fare share of obstacles, including their recording opportunity falling through last minute, when they first arrived in LA several years ago. In spite of this, they have managed to evolve from that and produce something great. Through their experiences they want to teach people that anyone can create music that reaches an audience if they put their mind to it. Unsurprisingly, they released their first record themselves through a joint effort with their manager’s company, Rebel Union. It was important for them to keep the rights to their music, so that they get to taste the fruits of their labours. They hope to be able to offer other groups similar set-ups to what they have built for themselves in the future.

I had the opportunity to interview band member Samuel Shea. I would say he’s the one with the magical rock ‘n’ roll locks; but they all have pretty fab hair. They have nailed the rock ’n’ roll look and as it happens, also the sound.

1. Describe where you were at musically before you came together as a group?

We were all playing in various projects and working in recording studios.

2. What inspired you to become musicians? Are you self-taught or did you study music?

I was always inspired by the music my mom would show me when I was growing up. I had a bit of piano and guitar training as a young kid but was mostly self taught.

3. How would you describe your music to people?

It’s a personal take on the struggles of being human. The songs are about the exploration of ourselves and our culture today.

4. Can you elaborate on your creative process as a group? What goes into writing a song? Do you work together or is the creation of the arrangement and lyrics led by specific members?

Myself, Julien, and Dan have done most of the writing. Ideas come from all of us individually and collectively. We work not only as a band but more of a whole production team. It’s a great way to be creative and stay constantly inspiring each other.

5. What influences and inspires the lyrics and melodies in your songs? Are these based on real life events or cover specific themes?

These songs are written out of a place of struggle and frustration. We’ve gone through a lot of rapid changes in the past few years acclimating to Los Angeles. Other songs are more thematically written.

6. What outside of music contributes to the development of your music? Is there something you do to rejuvenate your creativity?

The experience of life and this moment in our lives has been very inspiring recently. We’re getting to experience different cultures and see new places, meet new people. That keeps me constantly inspired. Recently I’ve been running while on the road and that’s a good way to get the morning going and stay rejuvenated.

7. If you could receive musical critique from any musician or group (alive or dead), who would it be and why?

Currently in this moment I’d love to see what Thom Yorke thinks of the record. I’ve been listening to a lot of Radiohead the past few weeks and reconnecting with that band.

8. Which contemporary musicians can your sound be compared with?

People have compared us to a lot of bands. I think that people hear guitars and compare you to every guitar band they can think of.

9. Have there been any noteworthy events that happened while creating your debut album?

Too many to count. But the final version of the record was completed over 3 months a year ago. That last final push had many moments of glory. Also many moments of let downs. In the end I think we made something really great and am very excited that people can hear it now.

10. Are there new music videos in the making that we can keep a look out for?

We’ve got some more visual media in the works and I will be able to see it fairly soon.

11. What is your view on the record industry of today?

People are in the position now to create a path for themselves. It’s a very exciting time to be an independent artist.

12. What advice would you give to other musicians trying to start out?

Keep trying to write the best songs you can! Never stop trying to perfect every bit of your process. Most of all never stop having fun with everything. There’s a reason we do what we do, it’s because we absolutely love it. Never let go of that feeling.

13. You recently completed a European tour; how did the audiences in Europe compare with those stateside?

The European audiences were great! Better than what we’ve been used to in the states. Now that we’re on tour with Liam, the crowds seem to be responding in a more enthusiastic way than previous US yours we’ve done.

14. It has just been released that you will be supporting Liam Gallagher on his upcoming tour- incredible news. How does it feel to know you will be touring with such an incredible talent within a few days?

At this point we’re 2 dates in. It’s been amazing so far. We’re so happy to be supporting such a real and influential artist. I’ve already had a couple moments where it really hit me that we’re playing with him for 9 more shows. It’s crazy, and absolutely exhilarating.

15. If there is one thing you could have people take away from your music what would it be? 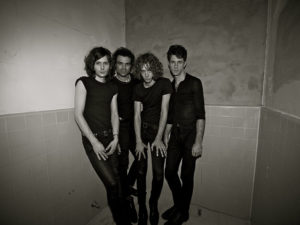