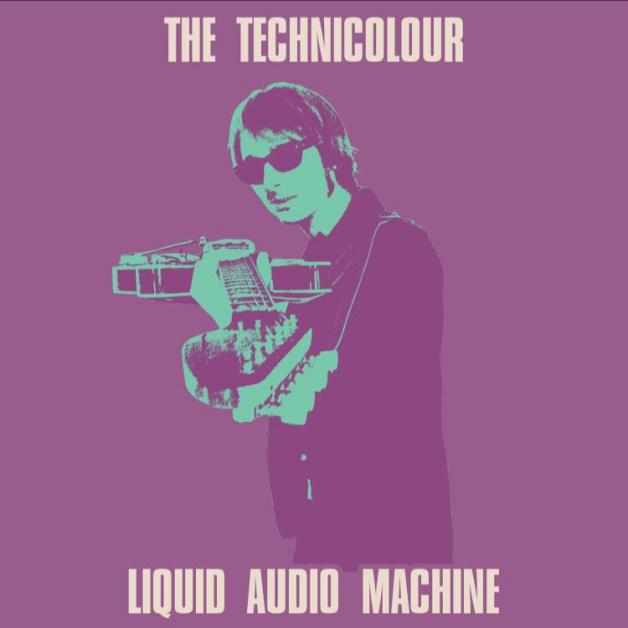 Black Market Karma’s new album The Technicolour Liquid Audio Machine is a a blast from the past. This is the vintage 60s soundtrack instrumental album with warm humming tones and dreamy atmospheres. Perfect for sitting back on the porch with drifting thoughts while catching some sun. The aesthetic is the velvet lined 60s shag with a chill upbeat analogue music that is semi electronic. This album shows the skill of band Leader Stan Belton as a composer.

The band consists of keyboards, organs, analogue synth and Eastern droning string instruments. All the instruments use various effects for paisley lo-fi nostalgia. The music is chill atmospheres that could easily accompany a cinematic montage of 60s films. The textured and distressed and warm music is never harsh or brazen on the high end. The percussion is soft tapping sounds much like a tabla with a couple songs with a full drum kit. The sound revolves around mellotron and analogue synth sounds giving the music a vintaged electronics feel.

Black Market Karma also known as BMK is the project of London based artist Stan Belton. Their line-up has changed over the years but the primary core of Stan Belton, and his brother Finley Belton. Black Market Karma released their first three full-length albums in 2012 titled Comatose, Cocoon and Easy Listening. In 2016 They released Animal Jive and Plastic Hippie. Their most popular song is titled, ‘Heady Ideas’ from the 2014 album Upside Out Inside Down.

The Technicolour Liquid Audio Machine released in 2021 was a tribute to Stan Belton’s grandfather. Stan recorded the album with only the equipment that he had available in his home which included keyboards, and recording software along with old drum tracks that were never used. At the time he much of his equipment was in storage and decided to make the album with the tools he had on hand. He remixed and overdubbed instruments and did not include any vocals on this album because he did not have the equipment to record the vocals properly. This latest release is an outlier in their catalogue because it has nearly no guitar and no vocals. Their music is usually build around guitars, sitars, bass guitar and vocal melodies but on the latest album all those foundational elements are missing and is the most atmospheric album to date. The album’s intended to allow the listener to create their own meaning and stories.

Overall, The Technicolour Liquid Audio Machine is very enjoyable and captures the lo-fi electronic psychedelic soundscape vibes perfectly. Many bands are wading into these water but Black Market Karma’s tones and compositions are unique and inspired. The warm and grainy sound of the album is nostalgic and soothing. The music feels liquid and carefree leaving the listener with a relaxed feeling that transports their imagination to another time and place.

Black Market Karma has become known over the years for their reverberating vocals, echoing guitars, steady rhythms and eastern instruments like sitars, tanpuras and other instruments with chiming sympathetic strings. They have always used organs and synth sounds to fill out the tones and add modulating textures to the music. All previous albums have been squarely rock music with shoegaze and psychedelic elements. The change of pace on The Tecnicolour Liquid Audio Machine is noticeable but still follows the bands aesthetic and is derived from similar inspirational elements.

Pow Magazine interviewed Stan Belton in April of 2021. This interview dives deeper into the songwriting process and the life of the band during these unusual times.