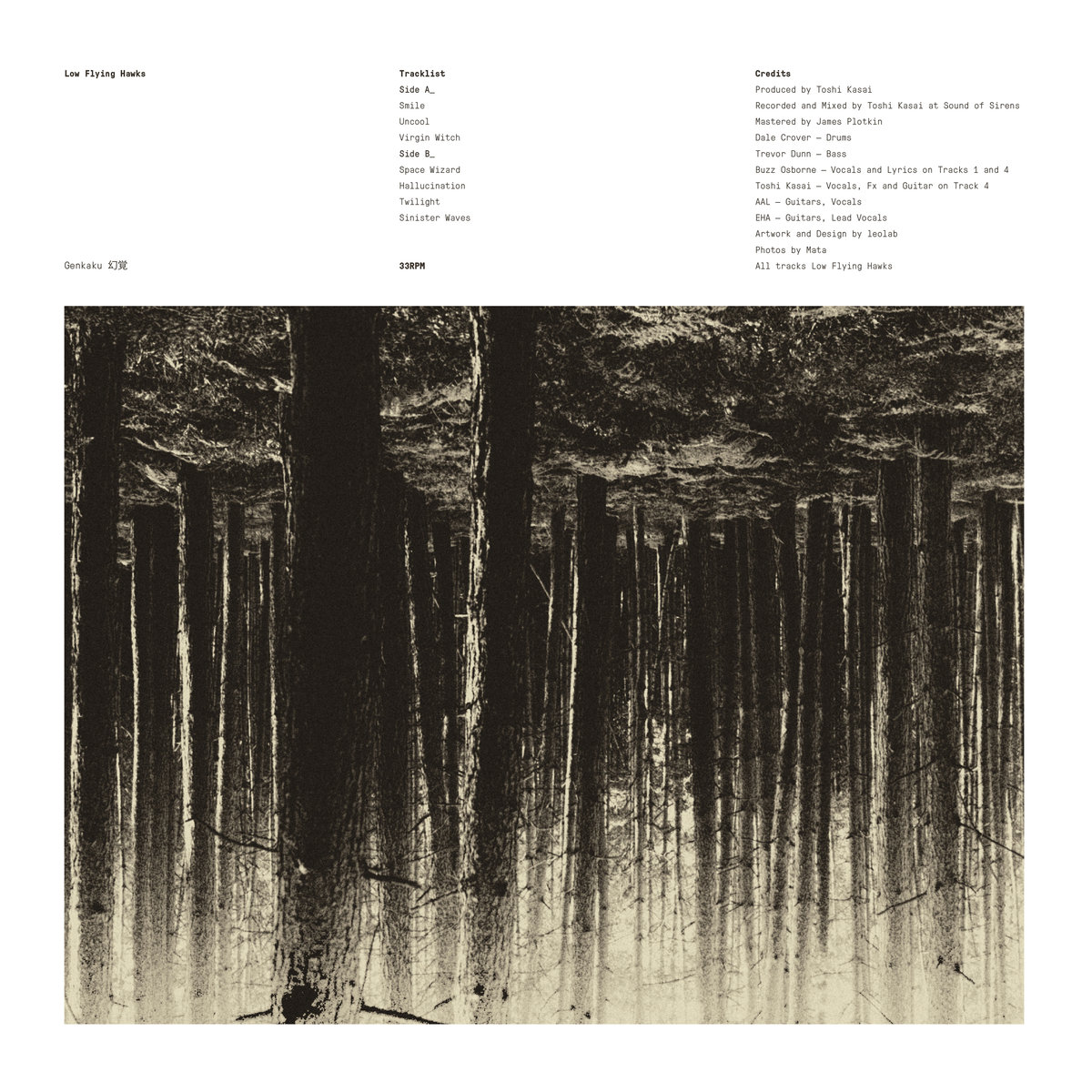 On Low Flying Hawks’ first endeavor Kōfaku it’s more than apparent AAL and EHA first embarked in the journey deep into your mind to tear it apart. But Genkaku it seems they’re dead set on dragging you through a portal and into a land devoid of all thought and reason. There they can feed your ears this gnarled distortion and leave you there all alone trying to make sense of it.

Starting Genkaku is “Smile”. AAL’s powerful guitars come drizzling down affecting all of your conscience like rain. The drums are so sludgy it can be heart stopping. But around halfway point a bolt of lightning completely changes everything. EHA’s singing, which was originally mournful are venomous. The whole piece shifts so much it’s like when Dr. Jekyll drinks his potion and stalks the streets looking for prey. “Uncool” starts with a devastating riffs that wanes and waxes that sound the way it feels to get stuck in the mud as the drums pull you along. EHA’s vocals turn into chanting as the instrumentation became more trance-like until its abrupt end leaves you breathless. The sludge-gaze “Virgin Witch” melds together a psychedelic head space and the most deafening atmosphere so far. Think Failure summoning High On Fire. The sound projects Low Flying Hawk through the clouds. Through the stratosphere. Into the void vacuums of space where every inch of the universe is present. Every cosmic terror is foreboding. And every scrap of hope is a distant memory. A perfect buildup to “Space Wizard”. The riffs are thicker than ever and the vocals, which begin to engulf you are drenched in style much reverb it becomes otherworldly. And the riffs just swell more. It’s so maddening “Hallucination” just feels like your fractured mind is melting and leaking out of your ears. Time signatures constantly change. Lyrics that bring to mind a heart being ripped from a chest. And an ending that could have been used in a score nearly any of Alfred Hitchcock’s classic films beautifully top off this Hellish number. If your mind melted earlier “Twilight” see you frantically trying to piece it back together. Beginning with this spastic hodgepodge The singer is more gnarled than ever here. Perfectly titled “Sinister Waves” finishes everything off. Each riff. Each beat. Each word is crushing. It’s beats you down to a pulp. Screams at you. Clashes against you. And you’re left a puddle. A husk of what you were.

And this is exactly what I want from a metal album. I want to feel every bite down to my bone and into my marrow. I want to shredding my soul to oblivion. Like ringing our a sponge. But in the end. All of that was in my head. I’m still whole. I’m still here. I’m just a tad bit stronger for the experience.