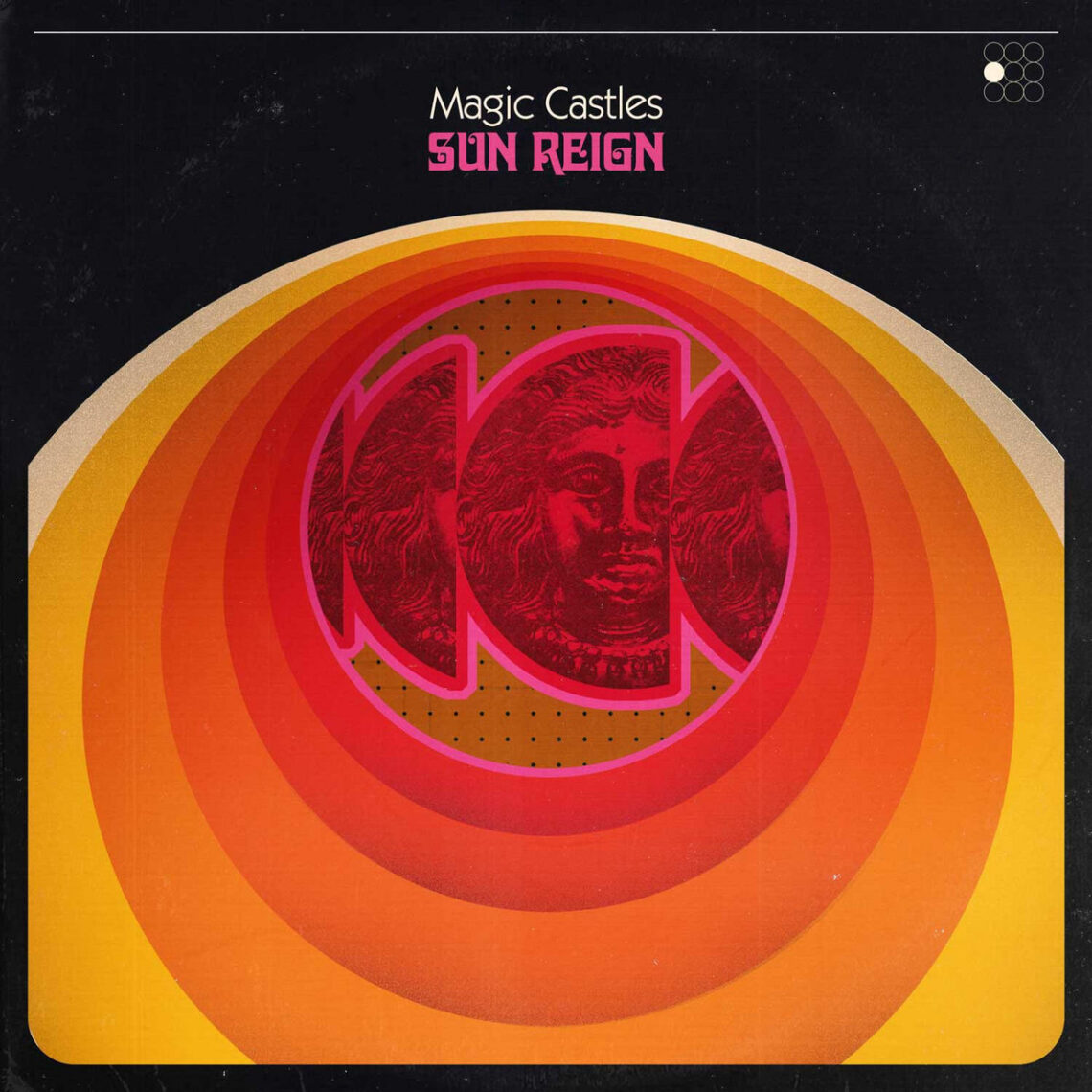 Sun Reign is an artistic album that sounds like a sonic flower glistening in the aftermath of winter’s snow with glittering textures and sparkling sunlight awash on the horizon. The spacious atmospheres embrace the listener in a warm glow that passes like clouds overhead. The band has developed a sound which can be found throughout all their albums and is derivative of other great Minneapolis bands like Muun Bato and Flavor Crystals.

Magic Castles Sun Reign is their seventh full-length album. It was released on A Records Ltd. the label run by Anton Newcombe of Brian Jonestown Massacre. The music is dreamy psych rock with 60s garage, 90s alternative rock, shoegaze and folk rock sounds. Driven by guitar chords, washy reverb vocals and warm humming organs to give the album a positive feel with simple melodies backed by dynamic shifting chords.

The album title insinuates a sunny disposition but it has a feeling of distance illuminated by airy vintage tones. It feels like “Sun Reign” is a reference to overcoming adversity and finding a sense of peace after hardship. The music strives for a sunny attitude but the sun is shining down on a somber landscape after a cold and windy night.

“There is a meaning behind this album, Sun Reign. I don’t want to come out and say exactly everything, I left a lot of breadcrumbs for people to find and digest. I will say the first song ‘Sunburst’ is obviously about a guitar. There are love songs, devotional songs, songs about redemption, songs about loss and heartache. Not exactly Saturday night shit but will be waiting for you some velvet morning. I love a lot of music. I mean I listen to a ton of music. Most of what I listen to is nothing like what Magic Castles sounds like but Sun Reign was influenced by early Spiritualized… A mix of British folk on top of American psychedelic music, like a tasty sandwich. I try to avoid overt homogenous bullshit”

The dark long cold winters and artistic community in Minneapolis have influenced the music of Magic Castles. Edmonds elaborates:

Many are unaware of the vibrant psychedelic rock and shoegaze scene in Minneapolis, Minnesota with bands like The Flavor Crystals, Muun Bato, Buffalo Fuzz, Black Satori and many more. The musicians in the scene are open to collaborations and there are ample opportunities to play at local venues and open for touring bands.

Edmonds has been in several projects over the years including Dead Gurus, Erros Mágicos and Night Court. Dead Gurus was dark heavy psychedelic rock band which found kinship with the European underground psych sound. Their album Acid Bench released in 2017 and featured members of Daughters of The Sun, Dream Weapon and Racoo-oo-oon. Erros Mágicos released their only album Shambhala on cassette in 2013. It was a magical folk album with unique music that is in need of a reissue featuring members of Muun Bato and First Communion After Party.

Magic Castles is the main project of Jason Edmonds which started in 2007. In 2008 they self-released their first album, The Love Of Mysticore quickly followed by two additional albums. These were well received among the local music scene and local radio but had limited visibility. Magic Castles then signed to A Recordings Ltd. in 2012 and released their self-titled album and the band gained exposure.

Magic Castles found international awareness with the release of Sky Sounds in 2014 followed by Starflower in 2015 and Sun Reign 6 years later in 2021. The band has faced challenges including regular line-up changes which led to inconsistent live performances over the years. The birth of Edmonds’ first child was a celebratory event which also contributed to the six years gap between Starflower and Sun Reign.

Magic Castles’ self-titled album released in 2012 was the first on A Records Ltd. and the fourth full-length. It established the foundations for their sound that carries through to today. Focused on vintage 60’s British psych folk sounds with vocal harmonies and organs. Sky Sounds would keep this approach and add colorful arrangements.

The follow-up, Sky Sounds in 2014 is another psych folk album with songs built around clean and acoustic guitars layered over droning tones and occasional vintage fuzz guitars tones. The subdued vocals were distant with echo and reverb setting them far back in the mix. The album had backing vocals that gave the songs a vintage feel. The overall production was warm and retro with a hint of intentional lo-fi tones.

Starflower solidified their sound and showed an evolution in songwriting, melody and overall production. The album features atmospheric psych folk soundscapes. Songs like ‘The One’ showed their ability to make a catchy song with a 90s Smashing Pumpkins feel, while staying true to their folk and shoegaze leaning sound. Other tracks like ‘Lost in Space’ show their ability to thrive in soundtrack like soundscapes.

In 2015 they embarked on a successful European / UK tour and played major festivals in Portugal and The Liverpool International Festival Of Psychedelia. Magic Castles was opened for the Brain Jonestown Massacre on tour and Anton Newcombe said an Uncut interview:

“I would like to encourage anyone planning to go to this concert not to miss the first act [Magic Castles]. I believe in their project enough to release it with my own money as a document. Actions speak louder than words. Music is meant to be heard more than talked about. I love the way some of their songs make me feel.”

Sun Reign has taken their music in a similar direction as Starflower. The production and songwriting evolved to bring out the best qualities of the previous albums in high-definition. The melodies and tones are more refined and the arrangement includes the occasional use of a string section. Balanced atmospheres have found perfect placement in the mix. The album has a folk rock feel but has moved toward the established Minneapolis sound. The track list includes a songs from the bands guitarist Jeremiah Doering and a cover song, ‘Ode To The Wind‘ by 60s band Danny and The Counts. Magic Castles are very consistent throughout their career and the music can sound similar across tracks and albums.

The vocals on Sun Reign are hard to understand and the lyrics don’t come through the mix on most of the songs. This creates a wash of sound that makes it difficult to derive meaning from the vocals. They are airy and create another tonal instrument that floats melodically over the instrumentation. In past, the vocals felt hidden, set way back in the music and this album they are relatively present in comparison. This has been a distinguishing feature of their sound and brings them toward the shoegaze approach with a droning sound. This seems intentional as some songs have stronger pronunciation and in others the vocals are tonal and echoing.

I asked Edmonds what the most important factors are that have propelled his musical career and he said:

“I’m grateful that I invested in music gear and can spend my time recording without depending on anyone else. I’m grateful for “A” Recordings LTD. I’ve spent most of my life supporting my music habit. My life and my musical life are completely merged, entwined and one and the same. Can’t stop won’t stop.”

Magic Castles Sun Reign is an album with songs that borrow from psychedelic music of the past while staying true to the establish Minneapolis sound best embodied by The Flavor Crystals and Muun Bato. While many reviewers write about their original sound it is truly a specific sound that comes from a specific generation of creatives in Minnesota.

This album will be among the best from the band and highlights their most frequented attributes. It is homogeneous in tone and creates a consistent drone awash in tonal vocals and dense reverb. It is a great album to play in the background and does have some nice subtleties. The guitars and organs are a highlight on the album with interesting tonality and interactions.

Overall, the sound is better then previous releases and the band stays nested in their comfort zone, doing what they do best, a blend of serene psych folk rock, shoegaze drone.