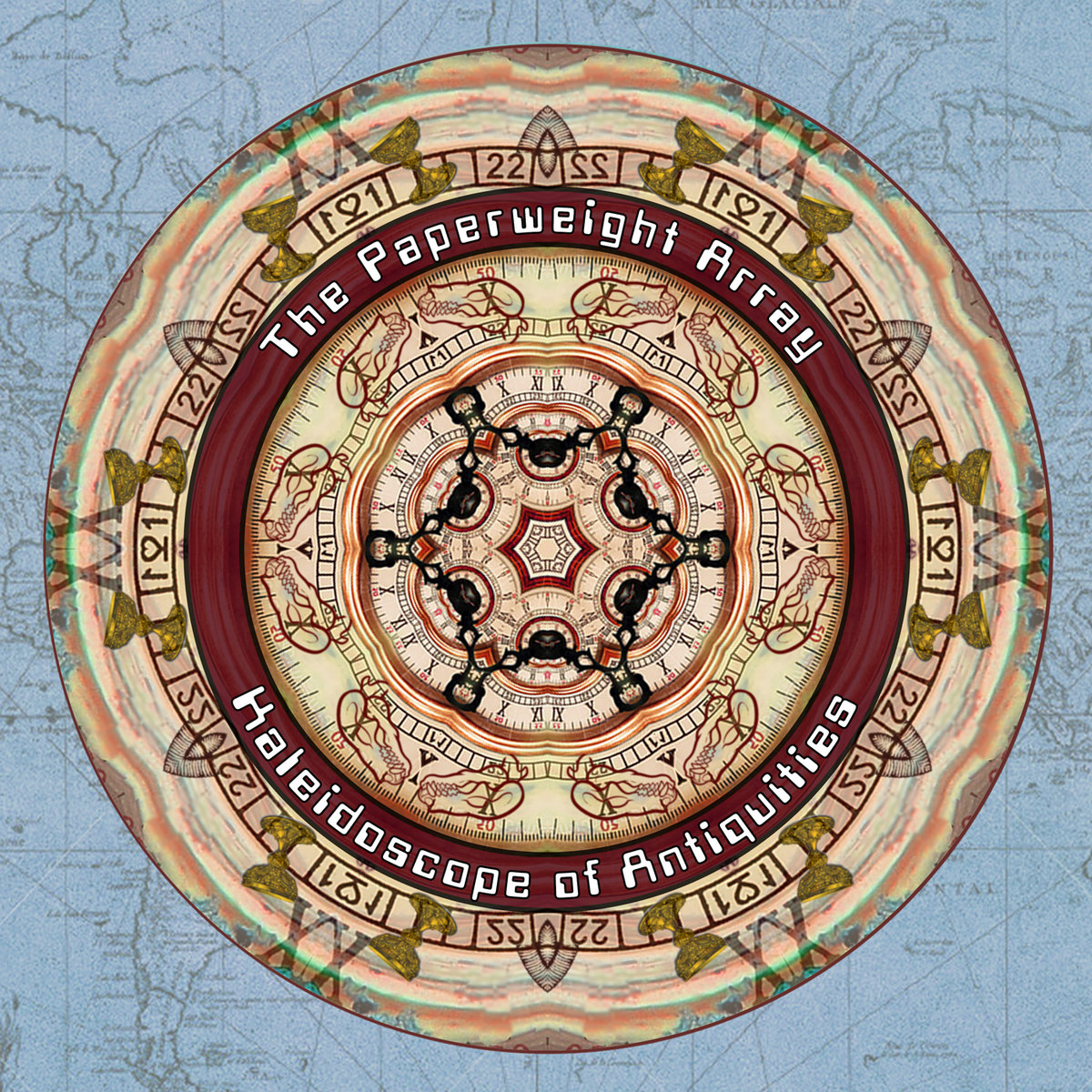 Northampton is the sort of place where anti-social behavior and grievous bodily harm are possible side effects whenever you nip out to the shops. It’s the kind of English midlands town where the pubs all have signs advising you to look after your belongings, and where the local venue, The Roadmender, requires a biometric scan of your thumbprint before you get your stuff back from coat check.  In short, it’s a bit rough. Therefore it’s all the more charming that local lads The Paperweight Array are trying to craft some pleasantly baroque psych out of their dour surroundings.

The Paperweight Array offered a promising debut EP in 2017’s Transmissions From A Distant Star.  Those three tracks held their own in the modern psych era, with a mix of instantly-catchy Syd Barrett melodies and Byrds-style harmonies, fitted with some ornate soloing. I’ve happily put it on for many of my psych-loving friends.
Their new EP, Kaleidoscope of Antiquities, arrives and, well…it’s a different story.  Self-produced by the trio, the music remains a complex and melodic pleasure, with some satisfyingly crunchy guitar tones peppering the new disc.  Paperweight Array know their way around a memorable tune and a sophisticated arrangement, and the instrumental mix is stone-solid.
There’s a great shaggy mammoth in the room, however, and that’s the vocals on the new EP. They’re terrible. The best I can say is they pitch up somewhere near Ian Brown on one of his off-days.  There are elements of Andy Partridge in both the singing and the songwriting, as well as hints of Jimi Goodwin from Doves.  But if your voice is not as strong as your influences’, you probably want to bury it a little in the mix, or add some subtle effects to bolster your cause. The vocals on the new EP are so far forward and dry they are overwhelming the musicianship. Unfortunately, this means the EP comes across more like a demo than a finished release.  Some understated harmonies do appear on the later songs, and they offer some welcome tunefulness, but by then it’s too little, too late.
The first track, Through The Stratosphere, is the main offender.  Despite kicking off with some swaggering guitar, it’s undone by the naked vocal performance.  Things improve with an audacious solo by mono-named guitarist/vocalist Aaron, and the song itself rides a line somewhere between the self-assurance of Britpop and the playful tunefulness of Squeeze.

The title track follows and starts with an enticing keyboard swirl, and closes with a dense, almost heavy, progressive-rock coda. Overall it gives a welcome nod to the aforementioned Doves on a bit more of a shaky comedown than normal.

Album closer, The Man Who Sold The Times, has the catchiest melody of the bunch and goes on a psychedelic walkabout halfway through, with intriguing spoken elements darting in and out of the mix. But here again, some additional processing or backing tracks would have been welcome on the main vocal.
As mentioned, both their EPs are self-produced. But the harmonies and mix on the first are so much more considered, it leads one to think they hurried the second out before it was finished. They should have left it cooking a bit.  Another day or two in the studio, multi-tracking vocals, and this promising EP could have been a knockout.  As it is I’ll keep revisiting their terrific first release, and look upon the second wondering what might have been.
Steve Courtney,
Pow Magazine