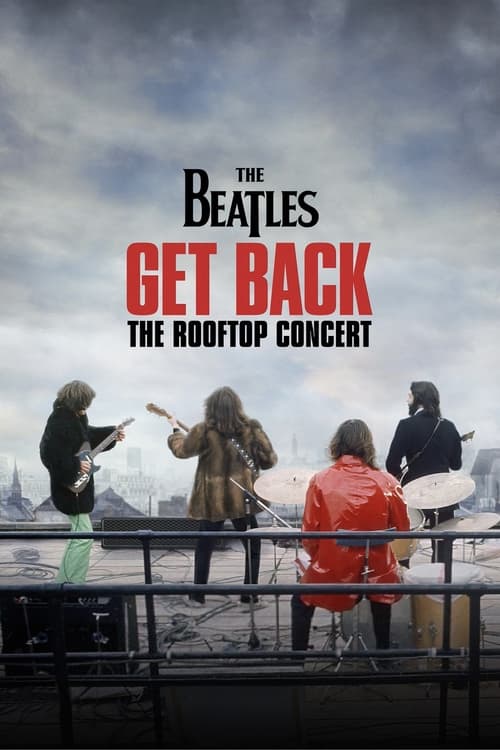 The Beatles are back on the big screen in Get Back – The Roof Top Concert. The film focuses on The Beatles final unannounced live performance on the roof top of Apple Studios in London. This legendary concert took place during the recording sessions for ‘Let It Be’ on January 30th, 1969. The film captures the whole performance and the drama that unfolds as the police attempt to shut it down.

The new film The Beatles: Get Back – Roof Top Concert premiered at the Sundance Film Festival in 2022. Due to Covid the film festival cancelled in-person screenings so the film premiered a dozens of IMAX Theaters around the country followed by a live stream with Peter Jackson.

The Roof Top Concert plays the iconic Beatles performance in full captured with ten cameras five on the roof top, one across the street on another roof top and four on the ground level. This performance was both a live concert and a recording session, a few of the performances made the final cut and appear on the Let It Be Album. Microphones were placed on the speakers and vocals with lines running down to the studios below where the performance was recorded on 8 track tape produced by George Martin with tape operator Alan Parsons.

The concert consists of 9 songs and a short interlude where they jam on the traditional English tune ‘God Save The Queen’. The rare live footage also has The Beatles playing brilliantly and ad-libbing, they starting on the wrong verse, forgetting the words, amps power off in the middle of the song. None of these idiosyncrasy lower the quality of performance and reveal the open and free flowing aspects of their music and writing style.

The street below the Apple Recording Studios was filling with people excited to get the first public preview of the newest music from The Beatles or wondering what was happening. The unwitting crowd had fans and grumpy old folks complaining about the noise and calling for the police to end the event. The police wanted to stop the music a serve a ticket for disturbing the peace.

The Beatles are one of the greatest bands of all-time with the iconic line-up of John Lennon, Paul McCartney, George Harrison and Ringo Starr. The Beatles: Get Back film was a 4 part series released in 2021 directed by Peter Jackson and showing on Disney Plus. This latest film is footage of only The Roof Top Concert uninterrupted and in full. The Beatles: Get Back was a four part series cut from the extensive film footage recorded during the recording sessions for Let It Be in 1969 London. It shows the tension, joy and creative process of The Beatles. They exchange humorous banter, flowing creativity and willingness to experiment, make mistakes, laugh and argue.

The cameras and the concept of making a film were a point of contention for The Beatles at the start of the sessions however, they adapted to having the cameras around. The pressure and personality dynamics create some conflict between the band members and at one point George Harrison quits the band. The exact moment is caught on film. Paul shouts ‘I think it’s time for lunch.’ “The crew replies lunch already?” Paul reply ‘Yes’ and George stands up and says, ‘Ahh, I think I’ll be leaving the band now.” George Harrison doesn’t return for several days bringing The Beatles to the verge of tears but ultimately he was convinced to complete the recording session and play in the roof top concert.

Throughout the sessions there is a subtext of a concert with The Beatles. The managers list place all over the world where they could play. No location seemed to be right until one day almost spontaneously, they decided let’s play on the roof of Apple Studios. This concert would be the last time The Beatles ever performed live together and the first time with Billy Preston on keys.

The studio was able to secure Billy Preston for the second half of the recording sessions. He was able to come into the sessions fill out the sound and add a new personality to the mix. All The Beatles had a high level of respect for Preston who was child prodigy on piano and had played with everyone including Ray Charles, Sam Cooke, Little Richard, The Rolling Stones and many more.

These amazing performances were captured beautifully with studio quality audio, professional films crew and one of the best rock bands in history. Stunning to believe that it took over 50 years for the footage to be properly edited and released. The rumors circulated regarding the Let It Be Sessions as it marked the beginning of the end of the band. Fan developed their own narrative and blamed their wives with a certain cruel description of Yoko Ono, John Lennon‘s spouse, breaking-up the band, which is not true. In fact, much of the story around the Let It Be studio sessions was filled with rumors, lies and blind-spots until this new film was released.

The film footage shows that each band member was growing in their own direction and wanting to explore their creativity beyond the band. Life had changed for The Beatles and they were ready to pursue their personal artistic journey with more creative control than The Beatles could provide. The Beatles Get Back also shows that the rumors about the musicians families breaking up the band are unfounded and there is no evidence of that in the film and the opposite appears to be true as the guys all seem to enjoy the company of their friends and family and it helps to put them at ease.

The Roof Top Concert is incredible on the big screen with pristine audio and beautifully restored and edited film footage. Seeing The Beatles on the big screen was a dream come true for many fans. The band is in their full glory with IMAX picture and state of the art surround sound. The music was powerful and moving. The triumphant performance is legendary and will forever grace the tales of rock and roll legend. The Beatles have taken on a mythic image and now they are bigger than life on the big screen.